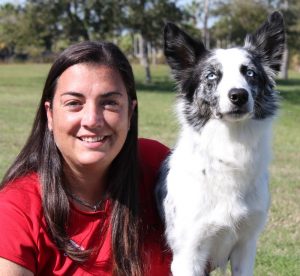 Annette is an accomplished dog trainer and competitor from Puerto Rico who turned her passion for training into a profession in 1997. After spending several years traveling the country performing with her canine team as part of the Purina Incredible Dog Team, Annette started teaching Agility full-time in Miami, FL.

She has competed with her dogs at numerous AKC and USDAA National events and represented Puerto Rico on an international level while competing at the World Agility Open Championships in England in 2011 with her dogs Dealer and Legend (Legend placed 4th in the Pentathlon class), at the IFCS Worlds in Texas in 2012 (Legend) and again at the World Agility Open Championships in Spain in 2013 (Legend). In 2014 at the IFCS CCOA Annette and Legend won silver in the Individual Biathlon. More recently (2013-2016) Annette has traveled to England, Austria and the Channel Islands to compete in various agility Festivals and Open competitions.

Outside of the competition ring, Annette’s canine team can be found performing in front of the camera for TV/movie work and advertising campaigns. Television appearances include “The Tonight Show with Jay Leno”, “The David Letterman Show”, as well as NBC’s “Today Show”. Her dog Dealer had a lead role in the Spanish Soap Opera “Perro Amor” while her dog Decker starred in the movie “Marley and Me”.

As much as she enjoys performing with her own dogs, Annette thrives on coaching others to be the best they can be and helping students achieve their training goals.

For Annette, training the ‘perfect’ dog begins with a strong relationship and realistic training goals geared toward the dog’s individual talents. Most importantly, it doesn’t matter whether you are training the next world champion or your best canine companion, keeping it fun is always the most important rule!

Annette currently offers private lesson, group classes and workshops in Davie, FL and is available for seminars upon request. 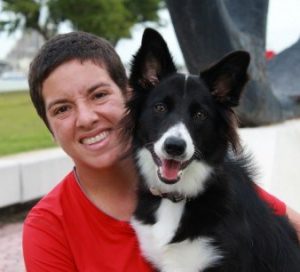 Sheyla Gutiérrez is a CPDT-KA (Certified Professional Dog Trainer) originally from San Juan, Puerto Rico. She offers a wide variety of dog training services to include obedience, and manners house training, rally and agility. She also offers consultation services to owners with dogs with aggression problems, separation anxiety situations and other behavior issues.

Sheyla is actively involved in various canine organizations. She is a Tester/Observer for Therapy Dogs Inc. as well as for the AKC Canine Good Citizen (CGC) program. She is a professional member of the Professional Association of Pet Dog Trainers (APDT) and an American Kennel Club (AKC) agility judge. She is also a member of the Caribe Kennel Club.

Sheyla has been training with her dogs in Obedience since she first adopted her Labrador Retriever Zohé. She loves reading and learning and enjoys sharing her knowledge with dog owners to help them learn how to properly communicate with their dogs. Sheyla feels training should be fun for both dog and handler and, of course, humane. She wholeheartedly believes that one can teach a dog to do many wonderful things simply with proper reinforcement techniques and that there is no need to force them to do anything they themselves do not want, or are not ready to do.

Most of Sheyla’s dogs are rescues, but through happy and loving training, using only positive reinforcement methods, her dogs have achieved and learned many things and have overcome many of their fears and traumas. All of them have earned their Canine Good Citizen certification and some even have advanced obedience and agility titles. Throughout her career, Sheyla has given many different demonstrations, visited schools, camps and hospitals, represented the island [PR] in national events and has made several appearances on local and national television.